Share
Facebook
Twitter
Pinterest
WhatsApp
Linkedin
George Tawlon Manneh Oppong Ousman Weah, a Liberian native born (October1, 1966) is the 25th and current President of Liberia. Prior to entering politics, President Weah was a professional footballer who played as a striker. His prolific eighteen-year professional playing career ended in 2003. During his footballer career, Weah received various awards. Such as the ‘African, European, and World Player of the Year’ in 1995—an unprecedented achievement. His talents on the field were equaled by his activism on behalf of his homeland. Working diligently to bring an end to a long civil war before entering into the political arena. Weah was elected to a Senate seat in 2014. Followed by winning the race for president of Liberia, January 2018.

Weah learned his football on the dusty streets of Monrovia before playing for Invincible Eleven, Mighty Barolle, Bongrange Bonguine, and Young Survivors of Clara town. After leading ‘Young Survivors’ a team without a coach into the first division, Weah signed a three-year semiprofessional contract with top Cameroonian club Tonnerre of Yaoundé. Which won its (1987) league championship in his first season.

Shortly thereafter, the promising 22-year-old striker was signed by ‘AS Monaco’ of the French first division. In his five seasons with Monaco (1987–92), he scored ’57’ goals, and lead the team to the ‘French Cup’ championship in 1991. His exceptional dribbling and shooting skills made him a crowd favorite, and his uncompromising work ethics and technical ability landed Weah a lucrative contract with Paris Saint-Germain (PSG). In his most acclaimed season, Weah led PSG to the French Cup, the league title, semifinals of the 1995 European Champions League. Subsequently he transferred to ‘A C Milan’ (1995–2000) in Italy’s Series A. Assisting the club to win the ‘1996 and 1999’ league titles. In January 2000, AC Milan loaned him to Chelsea of London, where he made an important contribution to that team’s ‘Football Association Cup’ triumph. At the end of his career, he played briefly with Manchester City and Marseille in France. Weah scored more goals and played in more matches than any other African professional in Europe.

Though Weah established a new home for his family in New York City, he maintained close ties to Liberia where he’s known as “King George” with an considerable amount of popularity. Liberia wrecked by poverty and civil war in the 1990s, was able to sustain ‘Lone Star’ the only national team with the assistance of Weah. Leading his talent and services to the team where needed. Be it, Player, Coach and Financial Investor. In 2002, after the Lone Star nearly qualifying for the World Cup, followed by performing poorly at the ‘African Cup of Nations’, Weah decided to retire from football.

Following the ouster of Pres. Charles Taylor in 2003, Weah returned to Liberia as a goodwill ambassador for the United Nations. In 2005 he ran for president of the country as a member of the Congress For Democratic Change (CDC) party. After winning the first round of voting, he was defeated by ‘Ellen Johnson Sirleaf’ of the Unity Party (UP) in the runoff election in November 2005. Weah initially challenged the election results in court, deciding to drop his case the following month.

Weah faced Johnson Sirleaf again in the October 2011 presidential election, but this time as a vice presidential candidate running on the CDC ticket with presidential candidate Winston Tubman. Johnson Sirleaf and Tubman emerged with the most votes, but neither garnered a majority causing a runoff election November 8, 2011. Less than a week before the runoff, Tubman cited CDC complaints about irregularities in the first round of voting and withdrew from the race. He also urged his supporters to boycott the election. International observers, who had previously declared the first round of voting to be free and fair, said his allegations were unsubstantiated. Johnson Sirleaf was reelected by a wide margin, as her victory was overshadowed by the withdrawal of the Tubman-Weah ticket from the race and low voter turnout.

In December 2014 Weah ran for the position of a senator of Montserrado county under the banner of the CDC. He handily defeated his nearest opponent, Robert Sirleaf (one of the president’s sons), taking 78 percent of the vote to Sirleaf’s just below 11 percent. Two years later in an effort to consolidate opposition strength in preparation for the 2017 elections, Weah’s CDC merged with two other parties to form the Coalition for Democratic Change (CDC). Weah was the CDC’s candidate in the ‘October 2017’ presidential election, with Jewel Howard Taylor, senator for Bong county and former wife of the ousted president Taylor, as his running mate. 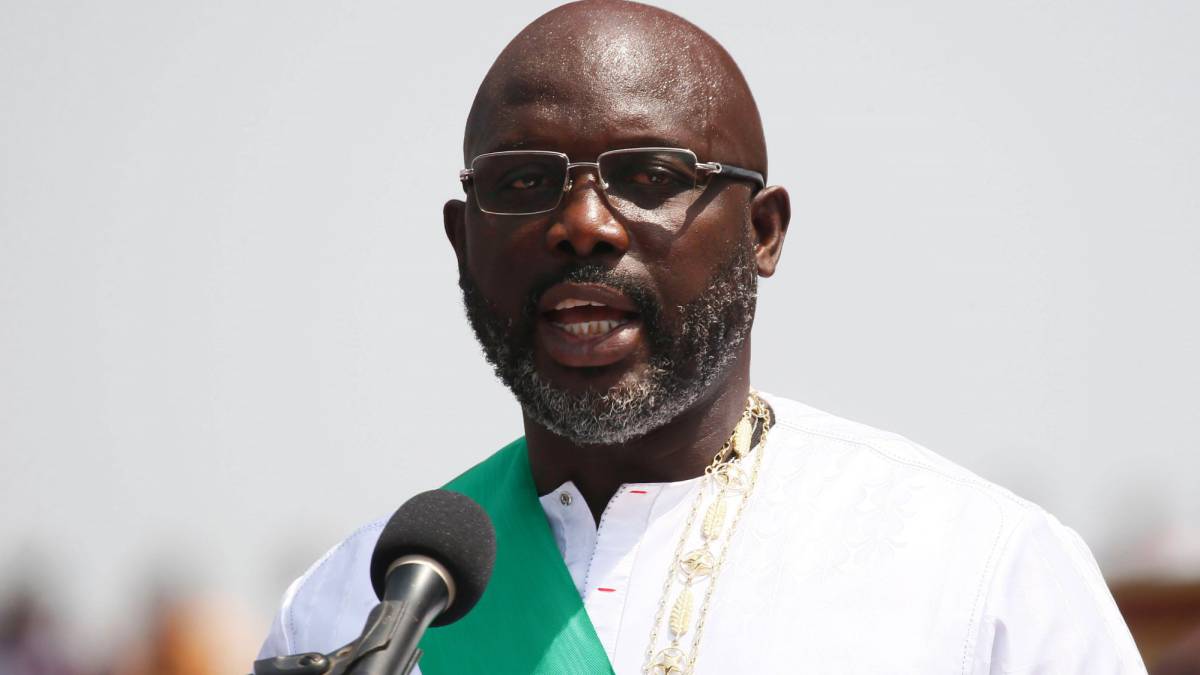 Weah was the top vote recipient in the first round of voting, winning about 38 percent in the October 10, 2017 poll. He and his nearest challenger, Vice President Joseph Boakai, represented the ‘UP’ and received about 29 percent of the vote. Both advanced to the ‘November 7th’ runoff election. The election was indefinitely postponed. However, after the Supreme Court ruled on November 6th, the electoral commission could not hold the election until the commission had finished investigating allegations of fraud and incompetence filed by the third-place winner Charles Brumskine, and his Liberty Party (LP). The LP’s complaints had the support of other political parties, including the UP. Furthermore, the UP alleged that Johnson Sirleaf had interfered in the electoral process to Weah’s benefit—a charge she has denied. After the electoral commission concluded its investigation and dismissed the LP’s allegations, on December 7th, the Supreme Court dismissed an appeal filed by the UP and LP and ordered the runoff election to be held. The election was held on December 26, 2017 which Weah claimed his victory. Garnering more than 60 percent of the vote. He was inaugurated on January 22, 2018, which marked the first transfer of power between two democratically elected leaders in Liberia since 1944.

Full article and credit to Britannica Website. Note: The images were added by libspot.