Rivercess County
Rivercess is Liberia’s south-central county, once a territory annexed to Grand Bassa County until 1984 when it became a county. Initially it had four main political districts ( Morweh Statutory District, Timbo , Yarnee and Rivercess County Central District known as “Central C District), but now it has six districts. Rivercess was originally spelt from a colonial oriented setting as “River Cess”.
The word Cess has no origin from any of the Liberian Languages but is used to describe places in the south and southeastern areas in Liberia; it is believed to have derived from the Portuguese Language or Latin and the meaning thereof is not known by the users, but recent search reveals that the word “Cess” has the following European origin; British (a tax, assessment, or lien), Scottish ( a land tax), Irish (a military assessment) and in India, the word “Cess” is used as an import or sales tax on a commodity. From all the origins of the word “Cess”, it means either tax, assess, lien and assessment. It can also be used as a verb or noun (“they say he has the taxes, too, in his power, and can cess you just as he likes”, cess also means luck; bad cess to or good cess to you). So Liberians need to know in what context the word “Cess” was used in Liberia whether it means the river of luck, river or point of tax, area of luck or area of foreign assess, etc. 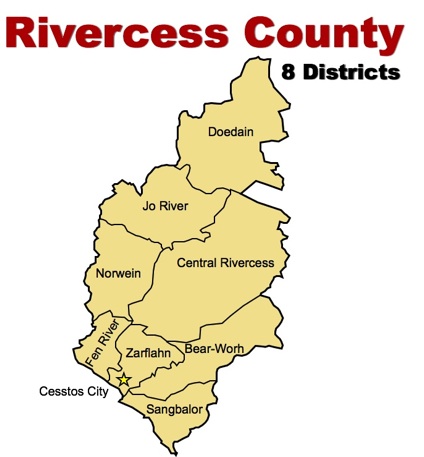 Cesstos is the provincial capital of Rivercess County and the seat of its local government. Cesstos is situated on the shore of the Atlantic Ocean. The territorial land of the county is measured as 2,160 square miles (5,594 sq. km). The 2008 national census puts Rivercess’ population as 71,509 thus becoming the third least populated county.
The low population account given for Rivercess County is not the actual number of people born and raised in Rivercess; there has been constant migration of huge number of the county’s citizens, be it young children of school age or adults due to the lack of needed educational facilities, opportunities and the lack of employment opportunities and basic development for the growing local population. There are more Rivercess People in other places like; LARC (a rubber plantation in Grand Bassa), Buchanan City, the Firestone Rubber Plantation Camps in Margibi County, Harbel and Kakata Cities, Yekepa, Nimba County, Monrovia, Bomi County (Bomi Hills), on the camps of Firestone Rubber Plantation in Maryland County, etcetera than the number of people in the county, it could be more than 3 to 4 times of the given population of Rivercess. This problem of endless migration as mentioned in the case of Rivercess County, it is prevalent in Liberia as it relates to the rural areas.

When it comes the survey of the territorial land of Rivercess since the founding of the Republic of Liberia, there has not been a real and well-planned national survey by the Liberian Government to survey the land of Rivercess through its length and width; in terms of the distance of the stretch of the land and to cross the land. Government always used the assistance of some visiting research teams or geologists to conduct surveys from the air (sky) through the means of helicopters and not directly from the ground due to the lack of roads and the inaccessibility to cross the land through its length and breadth. So the statistics given about the land of Rivercess is debatable, even during national censuses, the numerators do not assess or reach all towns and villages in Rivercess to enumerate the dwellers. So from time in memorial, the given populations have been questionable. This similarity of the Rivercess scenario applies to most counties or rural settings in Liberia. 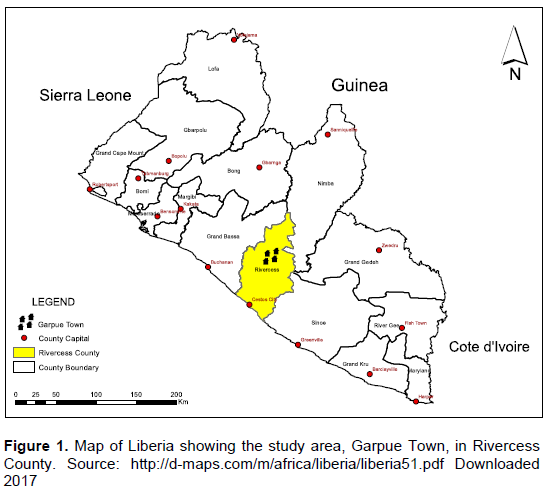 Rivercess County is bounded on the west by Grand Bassa County, northeast by Nimba County, and southeast by Sinoe County and the Atlantic Ocean lies to the south. Rivercess is considered as the eighth largest county in Liberia, in terms of its size or region.
Rivercess is the designated county for the national Reforestation Project. The Reforestation Plantation covers an area of 276 hectares (680 acres).
The livelihood of the people of Rivercess County is subsistence farming couples with fishing and hunting. While rice and cassava are the major crops, the people also grow and produce eddoes, yams, sweet potatoes, plantains, bananas, beans, bitter-balls, eggplants, peppers, plums, grapefruits, oranges, coconuts, palm oil, coffee, cocoa and variety of other grains, etc.
Features of Rivercess County
Rivercess is enriched with highland of tropical forests, swampland and savannah woodland. Most of the swamplands and savannah woodlands are found in the southern region of the county towards the Atlantic Ocean. The highlands and virgin tropical forests are found in central Rivercess region and the northern region of Morwehland (Morweh District). The county has enormous fertile land and many rivers and including the Atlantic Ocean for a growing fishery that could have a great economic impact on the county’s economy and the citizenry.
Besides the naturally beautiful beaches of the Atlantic Ocean and wonderful lagoons in Rivercess, there are other tourist-attractive and economic features which include but not limited to the followings; the Copper Mountain Boe Town central Morweh, the mountain ranges of the Copper Mount, the Coal Mountain, the natural Gold Creek in GBo-daee-deh, the four-pillar Rock near the Kpeh Town area in Gbiezhon District, Morweh.
The natural Fly-Mountain in the Gboor Town area (a mountain of flies) that is guarded by the Western Green Mamba (Liberian Yellow Mamba) twenty-four seven, the great White Rock Mountain with its cages, and a place known and considered by ancient Morwehlanders and today’s modern people as a monastery and the holy ground of their ancestors’ God, the Gen-Gen Forest and Mountain where the biggest flat sheet of copper rock ever seen and the huge “Twin-Rocks” with an elephant tooth that seem to depict ancient African craftworks or technology before 200-100 BC.
The Twin-Rocks are known by the people in the Morwehland area as “Zhauwiak”, its location is in the Doozhome District or Clan in Morweh Statutory District, The deepest unknown swamp ever seen, the “BaaduuwiiK”, and this natural safe sanctuary of the wild animals of Morwehland in Rivercess is located in the virgin forest between Karngbo Town and Yheagar Town, the Kpia-Trou Mountain with its traces of ancient African craftworks and cages of golden walls (The Kpia-Trou is found between Boe Town and the Doozhon Forest in Morweh District, and there are many more naturally and historically interesting tourist sites in other areas in Rivercess County.
CESTOS CITY
Cestos is the provincial capital of Rivercess County and the seat of the county’s local government. This one avenue city is situated at the shore of the Atlantic Ocean and the mouth of the Cestos River (the Basket River or the River of Baskets) just like Marshall City in Margibi County. According to the national census of 2008, Cestos’ population is about 2,578 people.
According to and from the people of Bassaland that own the land by God’s provision from birth and inheritance named and call Rivercess and Cestos, their county and town as; Neebon-wreen (Rivercess) and Touhn (at the stores, stores or market), but during the 16th century; town or site known today as Cestos was a growing commercial town where the people from the inland areas brought their products or goods for sale. And the people’s counterpart, the Portuguese or European traders began to call the town “Cestos” because of the various kinds of baskets that were sold in the seashore town. So the word “Cestos” from the background of the Portuguese or Spanish Language; it means basket. The one and only high school in the whole of Rivercess County is in Cestos City and it is called the “Cestos High School” (Cestos High). Due to the imperfect location of Cestos City or in other words, because Cestos City is not ideally located as a central provincial city of a county, most high school children of Rivercess leave the county for school to other counties for high education.
There is a growing concern in Rivercess for the establishment of a new centralized provincial city of the county instead of using the isolated town of Cestos as the seat of the local government and provincial city of the county.
Again, the Rivercess’ scenario is applicable to most of the colonial settings in Liberia, for example; whether the word “Rivercess” means; river tax, tax river, basket river, the river of baskets, “Cestos” means; basket town or city, or city or town of baskets. These issues remain debatable for a better understanding of Liberian and history.