Nimba County is a county in the northeastern Liberia that shares borders with the Republic of Côte d’Ivoire in the East and the Republic of Guinea in the Northwest. Its capitol city is Sanniquellie and its most populous city is Ganta. With the county’s area measuring 11,551 square kilometers (4,460 sq. mi), Nimba is the largest of Liberia’s 15 counties.

The county has 6 statutory districts and as of the 2008 Census, it had a population of 462,026, making it the second most populous county in Liberia.

Named after Neinbaa Tohn Mountain, which demarcates part of the Guinea-Côte d’Ivoire border, Nimba is also bordered by Bong and Grand Bassa counties to the west, Rivercess County to the southwest, and Grand Gedeh County to the southeast. The northern and northeastern parts of Nimba borders the nation of Guinea, while the northeast lies along the border of Côte. 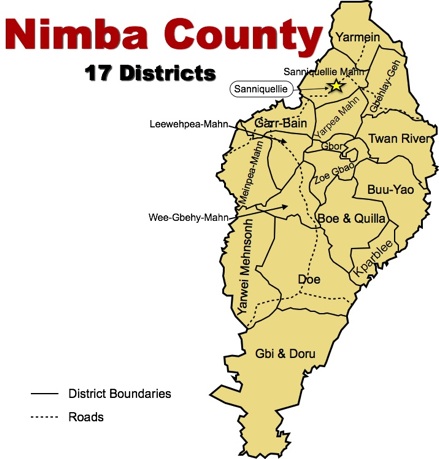 The County has two senators and nine members of representatives at the Legislative Branch of Government. The two senators currently serving the citizens of Nimba County are senior Senior Senator, Prince Yormie Johnson and junior Senator Mr. Thomas Semandahn Grupee