Maryland County is a county in the southeastern portion of Liberia. One of 15 counties that comprise the first-level of administrative division in the nation, it has two districts. Harper serves as the capital with the area of the county measuring 2,297 square kilometers (887 sq mi). As of the 2008 Census, it had a population of 136,404, making it the seventh most populous county in Liberia.

Named after the State of Maryland in the United States, it was an independent country as the Republic of Maryland from 1854 until it joined Liberia in 1857. The most populous city in the county is Pleebo with 22,963 residents, while Maryland’s County Superintendent is Nazarine Tubman. The county is bordered by Grand Kru County to the west and River Gee County to the north. The eastern part of Maryland borders the nation of Ivory Coast, separated by the Cavalla River.

Maryland County is located in the Southeast most corner of Liberia and borders the Atlantic Ocean to the South; the Cavalla River representing the international border with the Republic of Ivory Coast to the East; Grand Kru County on the West; 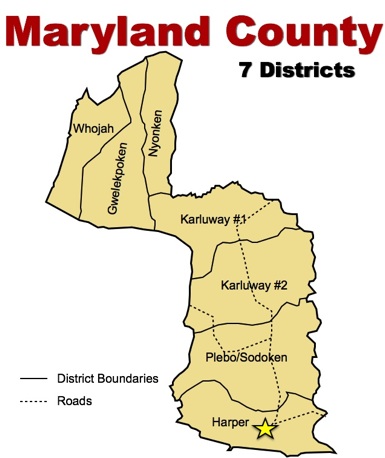 and River Gee County to the Northwest.

The resolution admitted the State of Maryland in Liberia as a County to the Republic with all privileges, immunities and rights accorded the three original counties. The Maryland State Colonization Society as a homeland founded the territory on February 12th,  1834 for free American Slaves.

Harper City is the political capital of the County and is also known as “Cape Palmas”.  Harper is a port city and is connected to the rest of the country by road, air, and sea.  The population, primarily Grebo, is historically reliant on subsistence agriculture, fishing and rubber tapping for its livelihood. The flag of Maryland County has three major colors, green, blue and yellow, with a palm tree and lighthouse inscribed in the field. The green color and the palm tree denote the county’s abundant natural vegetation; the yellow color depicts the “sunshine”, the blue color for the ‘valor’ of the County and the lighthouse as a guide for navigation. The County flag also has an insertion of the Liberian National Flag on the upper left side.