Lofa is one of Liberia’s far northern Counties; it finds the border s between Liberia, Guinea, and Sierra Leone.  The county has nine districts. Its provincial capital is Voinjama City, the seat of the local government.  The county’s area is measured 3, 854 square miles (9,982 sq. km}.  By 2008, Lofa has a population of 276863 people according to the national census and thus making it the third most populated county in Liberia.

The largest mountain in Liberia, Mount Wologizi lies in the north-central region of the county.

Voijama is the provincial capital of Loaf County. The city is located in the mountainous northern region of Lofa. The population of Voijama is 26,594 people according to the national census of 2008. 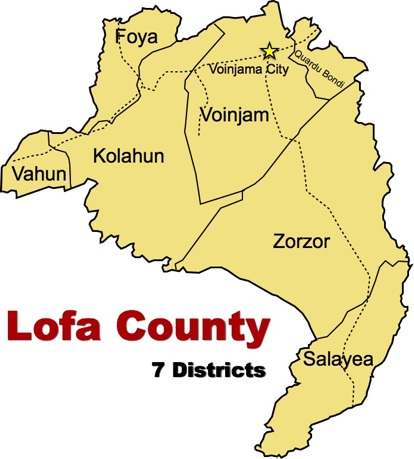 During prewar Liberia, Voijama City was a busy crossroad town with a huge weekly market setting dominated by the local people and commuters from the Guinean and Sierra Leonean border towns and villages.

Voijama as the seat of the local government of Lofa, hosts local officials, representatives of local and international non-governmental organizations (NGO)as well as business houses.  The Liberian civil war badly affected Voijama; homes, business houses, churches and mosques, schools, government offices, etc. were looted or burned down.  By 2005, the United Nations Regional Agency reported that the roads leading to Voijama had decayed and overgrown by dense bush and that they were inaccessible by vehicles except by foot.

The principal occupation of most of the people in Voijama is subsistence rice farming on dry land and the production of cassava, sweet potatoes,  potato greens, collard greens, peppers, bitter-balls, Red Palm Oil, palm nuts, coffee, cacao, etc.  Palm wine is also produced by local people for socialization and traditional settings.  If the industrial people of Voijama need any assistance, it will be agro tools to put their farming skills on a footing for greater food production.