GBARPOLU COUNTY- The county was created in 2001 by a legislative act of the Liberian National Legislature.  Up to 2019, Gbarpolu is Liberia’s newest county.

Gbarpolu is in the northern region of Liberia. The county was created in 2001 by a legislative act of the Liberian National Legislature.  Up to 2019, Gbarpolu is Liberia’s newest county.  The Gbarpolu area today was once called lower Lofa County.  The split of Lofa County that created Gbarpolu County took away the following districts from Lofa County: Gbarma, Kongba, Bopolu, Belle, and  Bokomu Districts.  Recently another administrative district was created known as “Gonuwolaila District”, so Gbarpolu is believed to have six administrative districts.

Bopolu is the provincial capital of Gbarpolu County; it was once the center of the Kondo Confederation which was made up of the Dei, Gola, Lorma, and Vai Peoples.  The Territory of the county is estimated as 3,741 square miles (   6,019.27 km).  Its population is about 83,758 people according to the 2008 national census, and thus making Gbarpolu the 7th most populated county within Liberia.

While subsistence farming is generally the livelihood activity of the people of Gbarpolu County, mining was the main economic activity in the area before the Liberian civil crisis.  Notably, Gbarpolu is high or dense forest land.  There are more gold and diamond mines in the county.  One of its most popular companies is the Kongba Community Gold Mines Limited, commonly known as “KCGM-Liberia”.

This company focuses on gold and diamond mining and their exploration.  KCGM is believed to have obtained what is called “100% owned Exploration Portfolio”; a so-called legal document that gives the company the rights to explore prospective gold and diamond areas in Liberia. Presently, this gold mining company operates nine (9) underground mines, one open-pit mine, and several surface operations in hidden valleys.  Besides gold and diamond, Gbarpolu produces high-quality timber and coal.

Bopolu is the provincial capital of Gbarpolu County.  This historical town is the former center of the “Kondo Confederation” that was comprised of the Dei-Bassa, Gola, Lorma, and Vai Peoples.  As of the national census of 2008, the population of Bopolu City is 2, 908.  The 2008 census also shows that 1,361 females and 1,547 males comprised the population of Bopolu respectively. 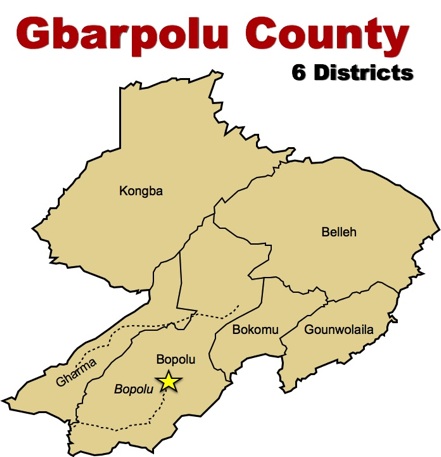 Bopolu City which is about 62.2 miles (100 km) was a center of trade. By the nineteenth century, the Bopolu area has reached its prominence under the historical King Boswan of Liberia in terms of commercial activities.  Local marketers and Slave Traders brought to Bopolu; ivories, gold, spices, camwood, and slaves in exchange for salt, tobacco, guns, and European cloths.

Subsistence farming is the general livelihood activity of the people of Bopolu.  They cultivate rice, cassava, yams, plantains, sweet potatoes, peppers, etcetera and produce palm oil and palm nuts for the Monrovian Market.