Bomi is a county in the northwestern portion of the West African nation of Liberia established in 1984. One of 15 counties that comprise the first-level of administrative division in the nation, it has four districts. Tubmanburg serves as the capital with the area of the county measuring 1,942 square kilometres (750 sq mi). As of the 2008 Census, it had a population of 82,036, making it the twelfth most populous county in Liberia. 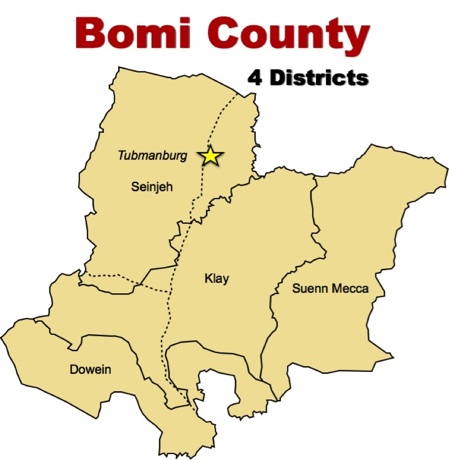 Bomi is bordered by Grand Cape Mount County to the west, Gbarpolu County to the north, Montserrado County to the southeast, and the Atlantic Ocean to the south. Tubmanburg, also known as Bomi and formerly known as Vaitown, is the capital of Bomi County in Liberia. It lies in the Bomi Hills northwest of Monrovia and was an iron ore and diamond mining center until it was largely destroyed in the First Liberian Civil War. During the Second Liberian Civil War, it was the headquarters of the Liberians United for Reconciliation and Democracy rebel group. Most residents are members of the Vai tribe.

Bomi County is a predominantly Gola speaking Region, though there are at least 15 different dialects or languages spoken. The population is predominantly made up of four Ethnic groups namely: Gola, Dei, Mandingo, and Kpelle. However, all of Liberia 16 major tribes are thought to be represented. About 70% of the active workforce is engaged in Agriculture.
The proximity of Bomi to Montserrado County rendered it vulnerable during the Civil War as various Warrant Factions of the War struggle at various times to take control of the Capital City of the County. Bomi County is well situated to recover strongly from the war, being endowed ample natural resources such as rubber, timber, diamond, iron ore, gold, water, stone, sand, and fertile agriculture land.
Bomi County formerly known as Bomi Territory was annexed from Montserrado County by decree during the military regime of Msgt Samuel K. Doe in 1983 and later recognized by an Act of Legislation. Bomi means “LIGHT” in the Gola language symbolizing the County uniqueness as the first cradle for iron ore mining in Liberia.
Before the national crisis, iron ore flourished in Bomi County. Beginning the 1950s and the 1960s, rubber has long been an important export from Bomi and the second largest rubber plantation in Liberia. The Sime Darby Plantation is situated in this county.
The flag of Bomi shows a rich, fertile land crisscrossed with rolling hills, a tree in the background. The hills represent the rich iron ore, while the tree depicts the fertility of the soil.
Facebook Comments

The Historical Flag of Liberia is celebrated on August 24 as...

The some History of people of modern Liberia hail from varied...