Grand Kru County is a county in the southeastern portion of Liberia.

Grand Kru County- One of 15 counties that comprise the first-level of administrative division in the nation, it has eighteen districts. Organized in 1984, its capital is Barclayville. The area of the county measures 3,895 square kilometres

Grand Kru County is in the southeastern region of Liberia.  It is one of Liberia’s newest counties or sub-political divisions that were established during the 1980s.  Grand Kru has about eighteen electoral districts; its provincial capital is Barclayville.  According to Liberian national data obtained, the territory of Grand Kru is measured as 1,504 square miles (3,895 sq. km).  The national census of 2008 puts Grand Kru’s population as 57,106.

From an economic analysis, the low population of the county is a result of the huge continuous migration of the inhabitants to other parts of Liberia due to the lack basic necessities such as; ground route connections or roads linking the county with other counties. The total absence of vocational and higher education training facilities, lack of structural employment opportunities, healthcare facilities, a real structural economic market, lack of electricity, running and safe drinking water system, lack of good governance and the lack of National Government’s attention from  1847 up to 1980 and beyond the civil war years of complete devastation and stagnation.

Grand Kru County is bordered on the northeast by River Gee; northwest by Sinoe County, southeast by Maryland County and the south by the Atlantic Ocean. 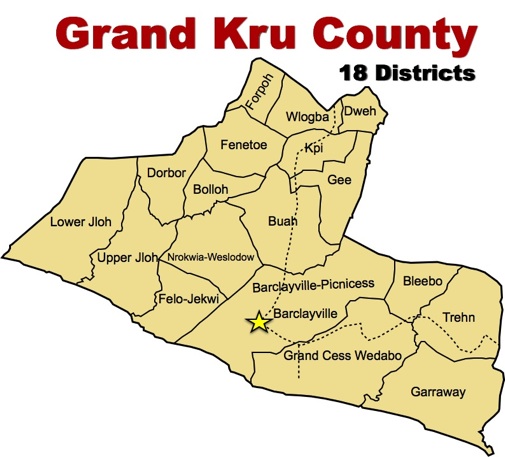 Barclayville is the provincial capital of Grand Kru County.  It is one of the most populous towns in southeastern Liberia.  The city is about ten miles inland from Picinicess.  According to the 2008 national census, the population is 2, 733.  The City of Barclayville sits on both sides of the Na River’s banks.  Roads from the following places or directions intersect at Barclayville; Kanweaken to northwestern region,  Plebo to the southeastern and to Picinicess and Grand Cess toward the southeast.

After many ages, the United Nations in 2006 constructed a major bridge over the Na River in Barclayville that links the provincial capital to Kanweaken and Pleebo districts. The residents of Barclayville and surrounding villages described the bridge as a commercial boost to the region.

Before the creation of the City of Barclayville, there were devastating intertribal conflicts between Krus and Krus (Kru, Kru Wars) in the 1930s in the total absence of the Liberian Government’s administration.  As the result of conflicts and the need for a way forward for peaceful coexistence in the southeastern region of the county, President Edwin Barclay exerted central government’s authority by encouraging the people of Grand Kru to combine four separate villages into one township (seetor, kayeken, wakpeken and Topor).  The villages of seetor, Kayeken and Wakpeken, and their surrounding suburbs are on the northwestern side of the Na River and the Village of Topor is on the south bank across from the Wakpekan direction.

Barclayville is a very big town but most of the structures are traditional mud and stick houses.  During the mid-1980s some little improved accord fewer homes had running or mini-electricity.  A local language of the Grebo People is the primary language of the citizens, whereas the English Language is the business, official, science, and technology being taught in schools.

The one and regional high school is in the city of Barclayville.  Alongside the high, there are some public and private Christian schools for grade children, ranging from kindergarten to 8th grade.  There are several Christian denominations that have churches or missions in the Barclayville and its surroundings, including the Catholic, Baptist, Methodist and other Evangelical Congregations.

After and before the Liberian civil conflict that erupted at the ending of the 1980s, only a few of the male adults were on the government payroll as school teachers, employees of courts, government officials and civil service staff.  Upland subsistence rice farming is the primary occupation of the local people around Barclayville and the whole county.

The agro-culture in Gran Kru is exhibited or practiced within the surrounding areas of Barclayville.  Each group within a village places hold on certain areas of communal land that are several miles inland from the town on which they do cut and burn farming, rotation to new or fertile land every year for a better harvest.   Besides the search for fertile land, farmers go far away inland to avoid their corps being.